A couple of months ago I wrote about grief from a different perspective (you can find that here) and I have more to say on the topic...

I previously wrote about how your point of view creates your reality. The pain and suffering associated with grief and loss gets created by how you’re seeing the situation and what you’re telling yourself. I spoke about death and offered some different ways to look at it.

Now I’d like to talk about another kind of grief that many people experience – the loss of a romantic relationship. Many people called this “heartache” or “heartbreak.” The words themselves suggest that a tremendous amount of pain accompanies this type of experience. 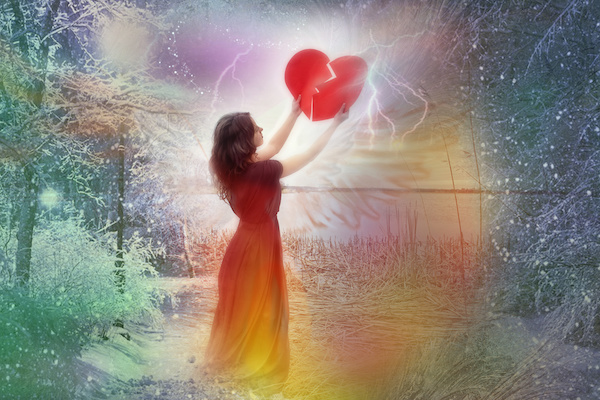 But does it really need to be so painful? In the past, I would have said yes. In fact, some of my breakups were so painful that I walled myself off and for years refused to get close to anyone, for fear of being hurt or disappointed like that again.

As I’ve worked on myself and with thousands of clients through my therapy/coaching practice, I’ve gained a far greater understanding of how thoughts and feelings work. With the tools I learned, I was able to finally let go of those fears of being hurt and allowed myself to get close with someone. And it was a really lovely experience… until it unexpectedly ended.

With this breakup, as I watched myself go through various emotions, I could easily pinpoint the source of pain. When I would feel shame or guilt, I would go into the shoulda/coulda/woulda universe… “Maybe I shouldn’t have said or done that. Maybe he would have stayed if I had done something different.” Basically judging myself, making myself wrong for some imagined sins I must have committed that created this.

This is a subtle form of control; when someone feels powerless over something that occurs, they often will blame themselves because it gives restores their sense of control. “If I can blame myself, then somehow all of this will make more sense.” This is what the mind does. It tries to understand cause and effect, but unfortunately many things, including matters of the heart, rarely follow any kind of logic.

With the breakup, every time I noticed myself getting fearful or sad, it was always connected to a specific negative thought: “I’ll never feel his arms around me, or wake up snuggled next to him;” or “I’ll miss those times we used to laugh... I’ll never find someone else who likes to do the same things, who gets me and my jokes,” etc. Basically something along the lines of “Woe is me, I’m all alone again and I’ll never find someone/something like this again.”

These are core beliefs that I have held for a long time. They speak to a scarcity mentality – the idea that there’s no one out there for me, and that I’m all alone in the world. I’ve done a lot of work on these beliefs, understanding intellectually that they are absolutely not true, but somewhere subconsciously, I was still clinging onto the painful experiences from the past, some of which, I came to discover, didn't even come from me. They came from my father, who was an angry, lonely person who lost his mother at a young age and never really recovered from it. Or from my mother, who was deeply bitter and hurt from my parents’ divorce, and never got close to another man after that.

How much of what we believe about ourselves comes from those who influence us at a young age? What if this point of view that I was holding about myself was not only not true, it wasn’t even about me? And how much of the pain I was experiencing was not just from the past and from my parents, but actually that of my ex, who also was very sad about the breakup? How much was I holding on to the sadness as a way to stay connected with him? How much was I doing that with everyone?

As I released that which was not mine, and changed the way I was thinking about the situation, things got easier. Way easier. In fact, I was able to remain friends with this person, and I now see that we are far better as friends than we ever were (or would have been) as lovers. Now I get to celebrate and enjoy the times we have together, as I continue to use my tools to attract someone else that more closely aligns with that which I am seeking in a relationship of this kind.

The Buddhists talk about how suffering gets created from attachment and resistance. When we get attached to the idea that things should be a certain way, that they should stay that way and never change, we create pain and suffering for ourselves. What if we didn’t have to cling to someone or the idea of being with someone forever? It was my attachment to that idea with this man that created the sadness and disappointment. It was the unfulfilled projections and expectations I had about what I thought we should be together that created the grief, the suffering. When I allowed the relationship to change and didn’t resist it anymore, I became free and we became free together to create something different.

So what if, in fact, grief is a choice? And what if grief is just another interesting point of view? What else could you choose?

Curious to explore this issue with me in more depth? You can book a private session with me here.

I can't thank you enough for such a great Foundation class! I feel so good. I manifested $2,000 today just by applying a couple of the tools I learned from you. How does it get any better than that?